tpelzy Dallas
January 2017 edited January 2017 in Movies
Spoilers for Cloverfield and 10 Cloverfield Lane. Not including the screenplay to God Particle.
So apparently J.J. Abrams has been working on his Magnum Opus for the past 10 years right under out noses and we didn't even notice. I had no idea that there was any shared mythos behind the films, and I assumed it was an anthology. I randomly came across an amazing theory video from a youtuber named Inside A Mind. He presents a theory that puts both movies in one timeline.

13,000 years ago space aliens dropped off some eggs in the middle of the Atlantic ocean and left a satellite to watch over them. In 1945, company called Tagruato is founded in Japan. Between then and the events of the first movie Tagruato begins mining the ocean floor (or possibly alien eggs) for the secret ingredient to the "Slusho!" drink, seabed's nectar. In 2008, the alien baby gets woken up by Tagruato's Chuai deep sea drilling station and becomes the cloverfield monster. The monster is killed and the pissed alien parents decide to pay earth a visit. Cut to March 2016 and the events of 10 Cloverfield Lane.

I don't have much of a theory, but I do think that God particle is going to be set in the Cloverfield universe. It is apparently another addition to the "trying to survive in space" genre. Going by the name the plot will be based around the some new discovery about the universe, aliens or even humanity. I think the name refers to the Higgs Boson particle that was discovered a couple years ago. I remember there was a theory that experiment that lead to the discovery might create a black hole. That would be an interesting idea to play with.
So the main reason I'm convinced that these movies are part of a single narrative is the augmented reality game (ARG) associated with them. There were MySpace accounts created for several characters in Cloverfied. Tagruato has a corporate webiste. Personal websites and videos created by different characters. Fans have even found real life Easter eggs in locations from the ARG. People who emailed 18KagashimaD@tagruato.jp got responses from characters in the ARG.  There really is a story within the story. So much work has gone into it that I don't believe they aren't setting up an overarching meta narrative to the story.
Most of what I said is speculation, but if you wanna see more hard evidence you can watch the video below and visit the wiki. Though I warn you the rabbit hole goes deep on this one. Apparently the screenplay is on Reddit if you're interested just don't spoil it for me. 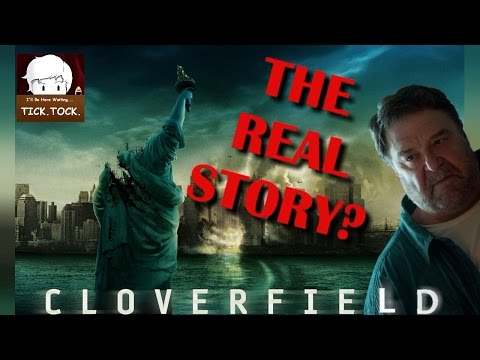